After an assembly video for a new floor socket has been created, the customer should have a product video created for the same product. This 3D product video should be used for social media, Facebook, Instagram and YouTube to briefly and concisely emphasize the product advantages within 30 seconds. In order to keep the effort within bounds, the video clip should be created from existing animations from the previously created assembly video.

The customer's goal was to have an attention-grabbing product video produced with existing animations. 3D animation scenes that were created for an assembly video could sometimes be used 1 to 1 here. Other sequences were slightly adjusted and then incorporated into the product video.

In order to gain direct access to the product video, the product was briefly pulled apart at the beginning of the animation as in an exploded view and then put back together again. The floor box then flies into a hole in the ground in one go and the other product advantages are shown one after the other in 3D visualization.

Animation creation to match the music

The product video should be crisp and lurid. In the run-up to the project implementation, suitable music was selected and determined. The animation was adapted to match the beats and the drama in the music.

In addition to the coordinated product animation, sound effects were integrated into the video. 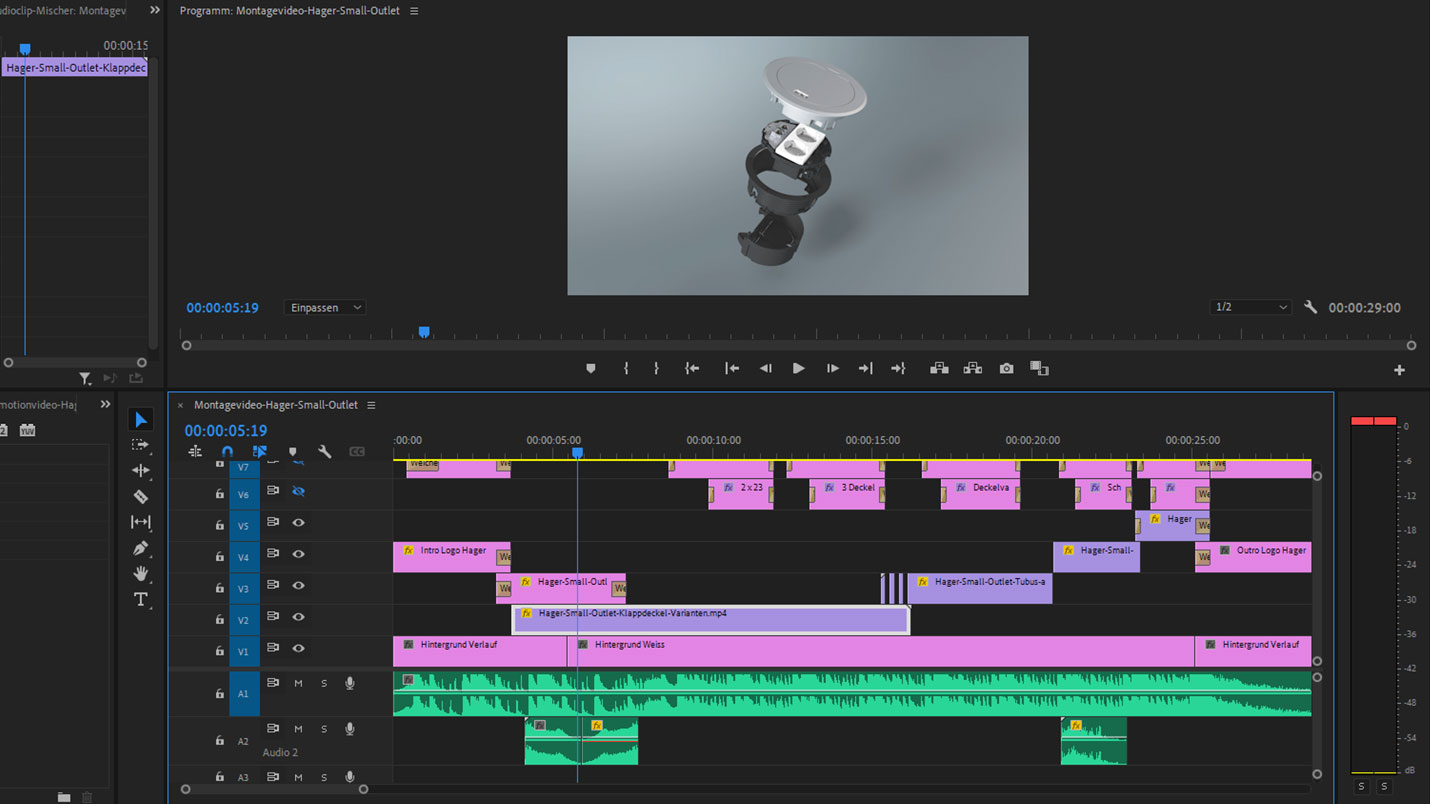 Music tuning for a product animation

Are you also looking for a 3D agency that also explains your technical product with a 3D product video? But you don't know yet whether this will work for you and your product? The Animations-Maschine offers you a free initial consultation. Let's just talk about your product and project. Together we will work out an ideal solution for your project. You then decide at your leisure whether you ultimately want to have a 3D product animation or a 3D promotion produced.

In addition to the classic 16:9 full HD landscape format, a product video in portrait format and one in square form should be derived for Instagram and Facebook. To ensure that the product animations are also displayed in sufficient pixel quality in portrait format, the animation was adjusted slightly and rendered with even higher resolution. The superimposed texts were either adjusted or completely reduced.

Modification of formats of a 3D product animation

In the first step, the video was produced in German and adapted to the desired formats. Subsequently, however, the product animation attracted a lot of attention in the other foreign branches. Additional language versions were produced to promote the product in other countries as well. At the end of the same video, the customer had additional product videos created for English, Polish, Norwegian, Danish and Finnish. The animations have always remained the same, only the texts were translated and exchanged in post-production.

Gallery of 3D animations of a product video

A small excerpt of implemented animations from the field of floor sockets.

Do you also have products from the field of electronic installation, underfloor, energy supply or generally interesting technical products? If you also want to have your products promoted and are looking for a 3D animation agency, then we are your partner and will be happy to help you. Get in touch with us and together we will develop a 3D animated product video, a product animation or another suitable solution.

Services rendered in the creation of the product video

To the overview of all animations